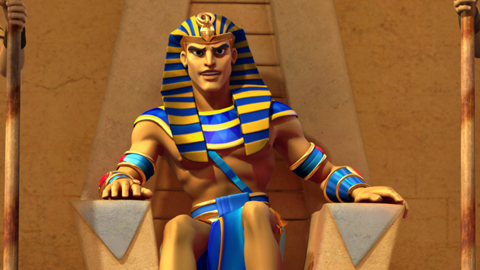 Pharaoh was the title for Egyptian kings until 323 B.C. In the Egyptian language, the word means “great house.”

The Egyptians believed that the Pharaoh was a god. While he ruled, he was the Son of Ra, the sun god. His word was law, and he owned everything. He was the head of the army and the central figure in the nation’s religious life.

After Pharaoh placed Joseph in power, Joseph brought the Israelites to Egypt. His descendants had many children and grandchildren. In fact, they multiplied so greatly that they became extremely powerful and filled the land. Eventually, a new Pharaoh came to power in Egypt who knew nothing about Joseph or what he had done. The Pharaoh told his people, “Look, the people of Israel now outnumber us and are stronger than we are. We must make a plan to keep them from growing even more. If we don’t, and if war breaks out, they will join our enemies and fight against us. Then they will escape from the country” (Exodus 1:10).

So the Egyptians made the Israelites their slaves. They appointed brutal slave drivers over them, hoping to wear them down with crushing labor. They forced them to build the cities of Pithom and Rameses as supply centers for the king. But the more the Egyptians oppressed them, the more the Israelites multiplied and spread, and the more alarmed the Egyptians became. So, under Pharaoh’s orders, the Egyptians worked the people of Israel without mercy. They made their lives bitter, forcing them to mix mortar and make bricks and do all the work in the fields. They were ruthless in all their demands.

God called Moses to deliver the Israelites from the ruthless hand of Pharaoh. When Moses went back to Egypt to ask for the freedom of the Israelites, the king of Egypt was so proud that he went up against the living God. After the ten plagues, Pharaoh eventually let the Israelites go. When he changed his mind and tried to chase down the Israelites, God drowned his army and chariots in the Red Sea. Pharaoh had rejected God and His power (Exodus 1:7-14).

• God is the one true, Almighty and living God.
• Kings and kingdoms come and go, but the Kingdom of God is eternal.
• When God speaks, listen carefully.
• God answers prayer.
• Pride, ambition, and jealousy can harden your heart. This can cause great harm to you and those around you.