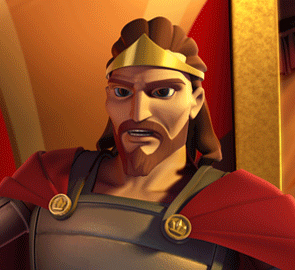 Saul’s name means “the one asked for” or “the one asking.” He was born to Kish, a wealthy farmer of the tribe of Benjamin. As a young man, he was head and shoulders taller than most men, but in spite of being good-looking, he was quite shy. When he was anointed king by the prophet Samuel at Ramah, he was surprised. He was filled with the Spirit of God, but he didn’t tell anyone about what happened.

Samuel retired as a political leader but remained influential as a priest and prophet. Saul became the first king of Israel, but soon he lost favour with God. Saul disobeyed God and Samuel had to tell him that God had rejected him as king (1 Samuel 13:13-14).

It was at this point that David was anointed the future King of Israel and Saul turned his heart away from God. After years of trying to hunt down and kill David, Saul’s life came to a tragic end when during a battle, he fell on his sword and ended his own life (1 Samuel 31).

• Obey God at all times.
• Get rid of impulsive, rebellious, jealous, and obsessive behaviour.
• Do not merely take part in religious ceremonies, but obey God whole-heartedly.