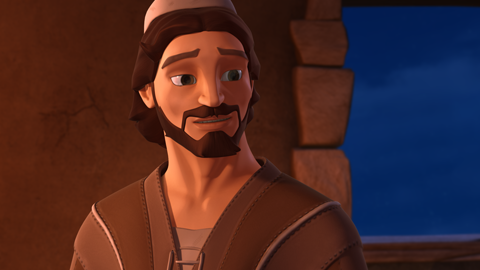 Joseph didn’t HAVE to be Jesus’ earthly father, but he CHOSE to obey what God said. He was a descendant of David and the husband of Mary, the mother of Jesus (Matthew 1:16, Luke 3:23). He was a man of integrity. He held strong beliefs and he always tried to do what was right. When he learned that Mary was pregnant, he knew the child was not his. He wanted to break the engagement in such a way that Mary would not suffer public shame. God showed him in a dream that the child was God’s. He instructed Joseph to take Mary as his wife Mary and to name the baby Jesus. For Joseph, believing this was difficult enough – but obeying it was a really BIG DEAL.

In other dreams, an angel of the Lord told Joseph to flee with his family to Egypt and later to return to Nazareth. Each time, Joseph obeyed God’s guidance immediately (Matthew 2:21). Around Nazareth, Jesus was known as “Joseph’s son” (Luke 4:22, John 1:45, John 6:42). He was Jesus’ earthly and legal father.

We don’t know how long Joseph lived, but he was last mentioned when Jesus was 12 years old when he took his family to Jerusalem for the Passover. We know Joseph was a carpenter or woodworker as Jesus was referred to as “the carpenter’s son” (Matthew 13:55, Mark 6:3). During Jesus’ ministry as an adult, there is no mention of Joseph, so it is assumed that he was dead. Joseph was most likely the father of James, Joseph, Simon, Judas (not the one who later betrayed Jesus), and he had daughters, as well (Matthew 13:55, Mark 6:3).

• Submit to God’s will.
• Trust God for your future.
• Obey God’s instructions.