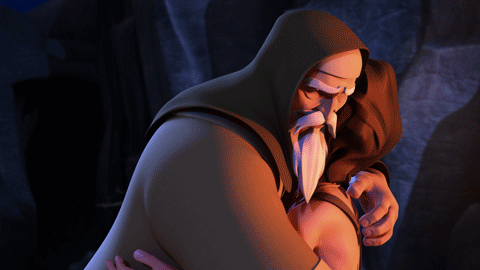 In his younger years, Abraham lived in the city of Ur. God told him to leave Ur and travel far away to a country called Canaan. God also said Abraham would become the father of a great nation. Abraham trusted God and was obedient to Him. He set off with his wife Sarah, his nephew Lot, his father Terah, as well as other relatives, servants, and animals.

Abraham and his family traveled for a long time, living in tents. He first settled in Haran (about 560 miles away) and later went to Shechem, Bethel, and Hebron. The people around him worshiped pagan gods – but Abraham built altars and worshiped the True and Living God.

In the Bible, Abraham is referred to as the friend of God (2 Chronicles 20:7, James 2:23) and a man of faith (Hebrews 11:8-19). He was a patient man who waited 25 years for God’s promise of a son to be fulfilled. Throughout Abraham’s life, God revealed His plan to him because Abraham trusted God. When God tested Abraham’s faith by asking him to sacrifice his only son, it pointed to how God would provide His only Son, Jesus Christ, as a sacrifice for the sins of the world.

Abraham died at age 175 and was buried next to Sarah in the cave of Machpelah, which Abraham bought from Ephron the Hittite (Genesis 23:17-20).

• God makes himself known to all people.
• Faith (like Abraham’s) pleases God.
• God wants us to depend on Him, to have Faith in Him and to obey Him.
• Be patient. God keeps His promises.