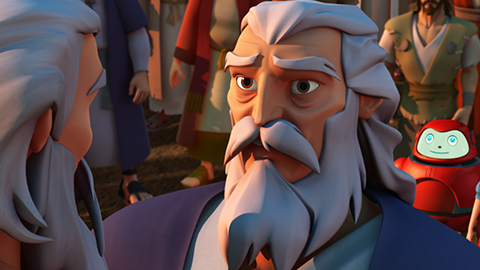 Aaron was Moses’ brother. He was married to Elisheba, daughter of Amminadab (Exodus 6:23). When God called Moses to lead the Hebrew people out of slavery in Egypt, Moses protested that he was not a good public speaker. God then chose Aaron, who was very well-spoken, to be Moses’ official spokesman. At Moses’ instruction, Aaron also performed miracles as signs (for example, Aaron’s staff turned into a serpent and swallowed the staffs of the Egyptian magicians in (Exodus 7:8-20).

During the wanderings in the wilderness, Aaron’s staff was the only one that produced buds, blossoms, and almonds. This was an indication that God was choosing Aaron and his descendants as priests (Numbers 17:1-10).

Aaron became a leader alongside his brother, Moses. He helped Moses keep order and give judgments during the years in the wilderness. When the priesthood was instituted, Aaron became the first high priest of Israel (Exodus 28-29). He became the spiritual leader of the nation, but he committed a serious sin when he yielded to the pressure of the people and built the golden calf for them to worship. This was happening while Moses was at the top of the mountain praying and receiving the Ten Commandments. Moses prayed to God on Aaron’s behalf, and God spared his life.

Aaron handed over his priestly garments to his son Eleazar on Mount Hor and then died. After his death, the community mourned for 30 days (Numbers 20:22-29). Like Moses, Aaron did not enter the Promised Land.

• Be willing to be part of a team.
• Use your special abilities and skills for God.
• Stand up for what is right and don’t yield to public pressure.
• Take responsibility for your actions.